Hello Friends and Family, Julian here! I am so excited to share about what we have been doing on this great Hawaiian shirt day! After sleeping through the barkpocalypse (early morning event where every dog in a 10 *kilometer* radius barks for roughly an hour), eating a hearty breakfast, enjoying some productive team time and eating lunch, we had an impromptu water war. It all started when a few of the leaders took Matt from his comfy hammock and threw him in a nearby pool, it did not go by smoothly and Matt almost escaped, but with that action, the war began. Daniel was stationed on the side of the patio with his water cannon (hose) while the infantry began to attack the unsuspecting students. I ran through the battlefield holding my violin with dear life as I could not get it wet. Once I returned it inside, I re-entered no man’s land and quickly became soaked. I decided to change my shirt and once I returned, I found myself being hunted by the other brainwashed students. I ran for dear life, accidentally finding myself in another Romanian’s backyard and a man asking what I was doing, but luckily, they lost my trail. I scuttled back onto the main road and checked my surroundings, making sure I was safe. I was not. I ran away from the soldiers and found a hiding place behind some bushes. At that moment I was scared for my clothes and needed to choose my next move carefully. As I tried to catch my breath, I could hear Lief and Cade approaching my hiding spot, I got up, ready to run and leaped out of the bushes and probably trampled some plants. I sprinted through the grass and pavement and leaped from a hill, not knowing if it was 2 feet tall or 10 I landed and attempted to get back up. Luke, Nikki, and some others attacked me and finally took me down, hungry for blood. I walked back to the Vieru’s backyard, tired, wet, and unknowing of the horror to come. As I went to rest in a chair, the evil leaders grabbed me to send me into the pool. I struggled, tried to get out, sprayed my glasses spray at them, but it was to no avail.

Okay, okay, okay… Don’t freak out guys! Everyone is fine, alive, but with a lot of wet clothes. A while after that we went to Auschan, the big Costco-like Romanian mall. People picked up stuff for the games and crafts at camp, some Joseph,

(sorry that was from Toby, don’t tell Daniel that we were playing with him) 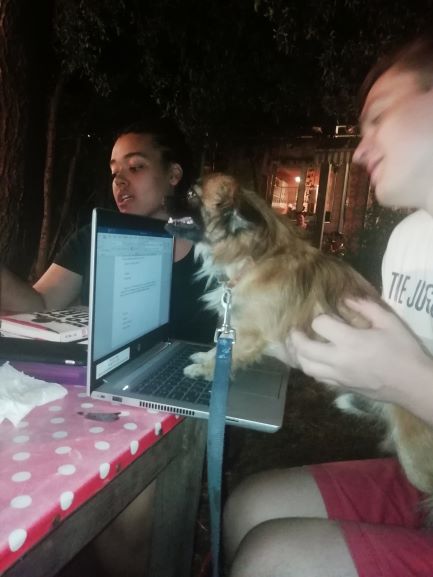 and other such sweets. Our last event of the day was a time to hangout with some of the Romanian students going to the camp at the school. We had a lot of time to catch up with students from last year and get to meet some of the numerous new faces at the soccer field. We went around in a circle and had everyone introduce themselves, saying their name and a word of something they like and then played energy. Basically, capture the flag with no flags and hard to explain rules of how to put someone in Jail. While were hanging out later a lot of us were working on Romanian phrases like “Crăiciun Fericit” which means “Merry Christmas”, “Mișto”, “Dope” and “Bate Palma”, “High Five”. Altogether, we are so excited for our remaining time in Craiova and what God has in store for us, at camp, with the students, and the leaders.

Thanks for reading peep!

To Hannah: Here’s your shoutout so feed my fish and I love you!

To Hannah: I miss my backpack buddy!

To Noah Pollard (from Aisha and Toni K): We miss you!

To George: I miss you buddy, I hope your vacation is going well. How is Stuart? Also, have you fed my fish?

To Nicky (from Kipp): How’s the craftin’?

To Morgan: Toni says that Ashton is his favorite Reed.

To Larry: Minimize the shanks and hit ‘em far!