Sup dudes, aka hello fellow comrads and aquaintences, Tree and Noah here to give you the low down on the latest throwdowns (don’t worry there weren’t actually any throwdowns, we just wanted to rhyme) 😛 (tongue out emoji). Friday meant the end of camp, but not the end of all of the friendships we had formed. Faces beamed as pictures were taken left and right, topped off with a huge group picture. It was another round of who wore it best as all 90 of us somehow happened to be wearing the same camp shirt. Funny how things like that happen.
The bus came when it wanted, giving us an extra 2 hours to enjoy the beautiful scenery and presence of our new and dear friends. A bus ride filled with 80s music, camp songs, round after round of “who high-fived me?”, and when possible, sleep entailed, closing the door on camp 2017 🙁 (frowny face emoji) We arrived back at what now feels like home at 7, completing a quality 6 hour travel day that was thankfully accompanied by air conditioning. We ended our night with a final game of mafia and then welcomed the embrace of our beautiful friend, sleep.
Today began at 9 when we made our way to a local market to explore hidden treasures of Romanian. The market was alive with the cry of birds, the sound of bartering, and broken Romanian as the 20 of us tried to figure out how much a wooden spoon with a crying laughing face emoji would cost. There were many impulse buys as bags filled with spoons, mugs, and chicken shaped pitchers. Our pools of sweat turned to actual pools when we ventured to Aqua Plus, a facility with pools upon pools that provided much needed cooling in the brutal heat. Living up to our Americanness we got yelled at for being too loud, which was justified as none of us had ever seen Pat get her hair wet by choice before. It was truly a “lit,” as the young ones say, game of Marco Polo. It even made a Romanian spectator so entertained he had to run over to his wife and explain our game, so we clearly must’ve been really fun to watch.
Our day ended on a high note when we met with the campers for a reunion in Romanescu Park, a beautiful space boasting a zoo, row boats for rental that we took full advantage of (which included getting soaked by the fountain), and a lot of neature (neat nature). We shared laughs over stories from camp and tried to capture a fraction of the joy we had the past week with as many pictures as possible. As the sky faded to black we put the bookmark in all of our new friendships, saying goodbyes with the hope we would pick up the conversations in the future.
And with that we SHOUT OUT
To Katrina for letting me write this while she was a team player and folded team laundry. To Sammy: Lavi and Cabs helped free my legs of some excess hair today… Noah I’m missing my fill-in older brother, its not the same having other people constantly making fun of me… Katrina Ali: oita, among others, misses you, but she has nothing on how much I miss random mosquito bites My (Noah’s) Fam: I love you guys lots Brian wreck-those-socks: this is a little late but: you got me good. I was shook To Halle B: hilarious. To Raymond: I wore a tank top today and tried to keep my arms down. – Dan To Ben and Jenna: Your friends say hi. To Jenna: I hope you’re having fun at Kernel. To Mom and Dr Anderson: thanks for the bird update, you better take some pictures for me. I saw a cool Romanian hawk today. To Rose: the 80s jam sesh was, well, jamming. It would’ve made you smile (or something like that but we forgot exactly what Marilyn told us to type… awkward giraffe) 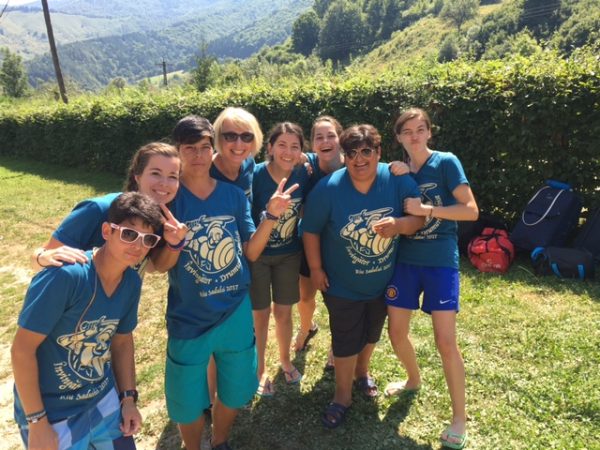